Most business people start out thinking that in business, they have the freedom to contract. They have the view as stated by Sir George Jessel MR in Printing and Numerical Registering Company v Sampson (1875) LR 19 Eq 462 at 465, over 140 years ago:

[I]f there is one thing more than another public policy requires it is that men of full age and competent understanding shall have the utmost liberty of contracting, and that their contracts when entered into freely and voluntarily shall be held sacred and shall be enforced by Courts of justice.

Over the past 140 years, the concept of freedom of contract has been eroded by legislation. Another wave of erosion has come in the changes made to the Corporations Act in July 2018.

Business people often make contracts containing the right to terminate the contract upon the happening of specified events. For instance, as a protection mechanism, an owner of intellectual property may enter into a licence (contract) a company they control to use a trade mark or patent but having the right to end the licence if the company enters into any event of insolvency. Clauses that give rights of termination on specific event occurring are known as ipso facto clauses.

Other examples of ipso facto clauses include rights to:

The ipso facto amendments seek to stay the enforcement of a contracting parties contractual rights to end the contract when:

The period of the stay depends on the type of insolvency that occurs.

The purpose of the stay is to allow the company to restructure without the adverse effects of the company being wound up.

The purpose of the changes was to overcome the criticism that ipso facto clauses reduce the prospects of a successful turnaround of a financially distressed company; and otherwise adversely impact the value of the business that is considering entering formal administration.

The changes include ant-avoidance provisions. Parties cannot contract out of the rules.

The amendments are subject to exclusions.

The rights excluded from the stay are set out in the act and include:

You can have a termination clause, but it must operate at the end of the stay period, i.e. on winding up (section 451E).

The diagram is a helpful tool. 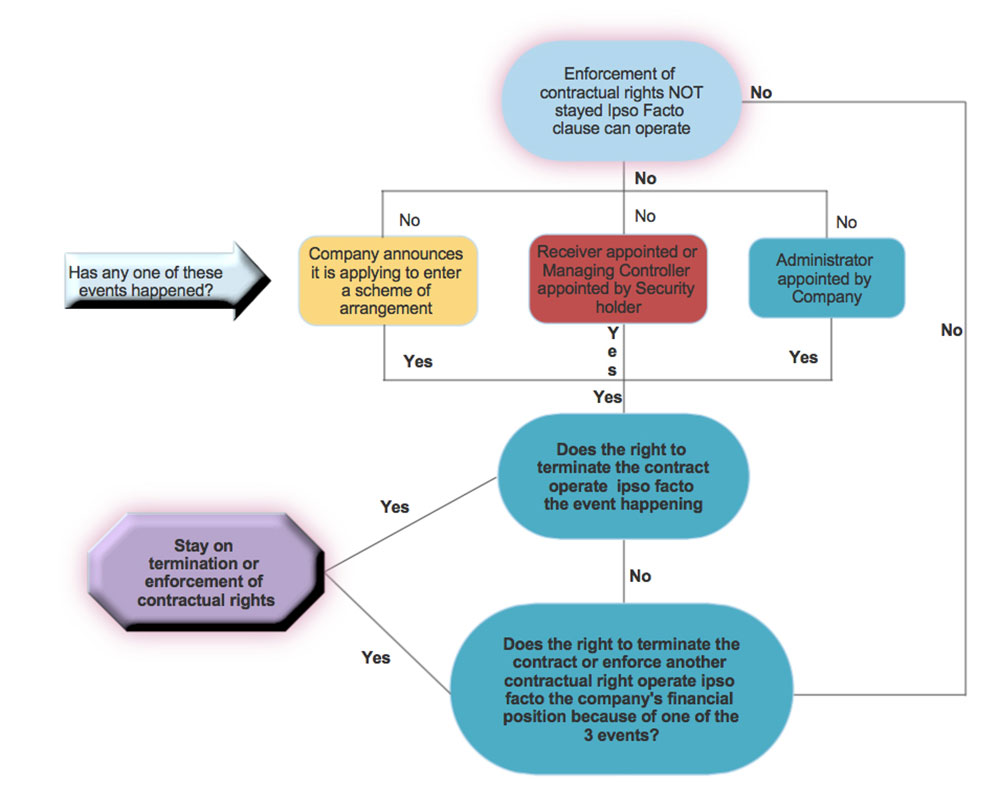