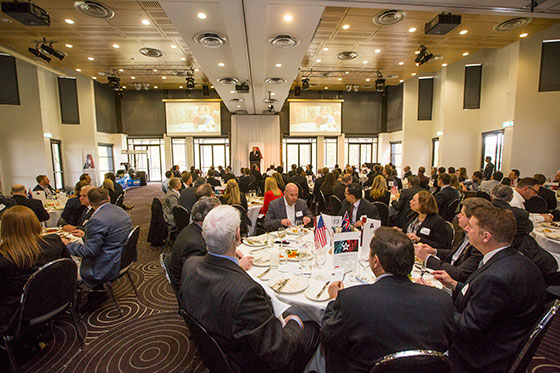 August 23 2016 will be remembered as an historic day when the eagle AmCham (the American Chamber of Commerce in Australia) landed in Greater Western Sydney.

AmCham GWS was officially launched to a capacity filled room of excited guests from a wide variety of businesses and organisations at Waterview at Bicentennial Park. The AmCham’s CEO Niels Marquardt extended a warm welcome and commented on their desire to pro-actively connect with the business community of the Greater West.

In an indication that AmCham GWS has definitely hit the ground running a number of functions were immediately announced which are to be held over coming weeks at Parramatta. The topics? Is your pitch attracting the clients you deserve? And, stimulating trade to the US. The latter would no doubt be a topic of interest for businesses in the Greater West seeking to engage in an easier form of export other than the Asian market. 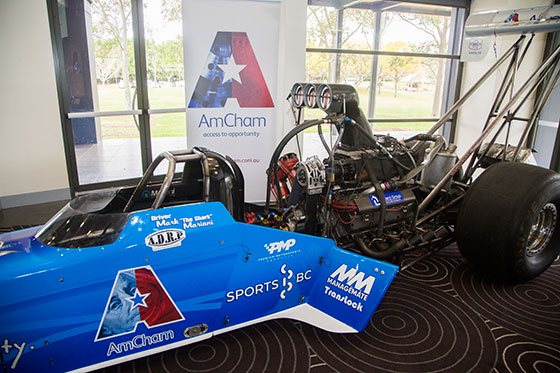 In addition to these and other AmCham calendar events planned for the West, a growing number of Chamber members have already committed themselves to supporting networking functions staged by our own network initiative, the Bella Vista Business Alliance.

The highlight of the launch luncheon was a practical and highly informative multimedia presentation delivered by keynote speaker Robbert Rietbroek, the CEO of Pepsico Australia and New Zealand. Robbert managed global brands at Proctor & Gamble and Kimberley-Clark prior to joining the world’s second largest food company, and he is the author of the ‘Building Billion Dollar Brands’ course. He took his audience through the 7 keys to building a billion dollar brand.

1. A Highly Compelling Brand Promise
For half a century BMW has promoted the same brand promise: The Ultimate Driving Experience. As Robbert noted, they are not a company making cars they are a company creating experiences for their customers. He added that the product or service must always deliver on the promise. It has to delight the consumer.

2. A Powerful Insight
Billion dollar brands capture attention by unlocking our minds and our hearts. They unlock the barriers that people use to prevent them making a purchase. An example of this was an American TVC for Subaru which showed a caring father offering driving advice to his daughter before she drove away. It was touching. Full of emotion.

3. Closure Power
Making a compelling claim helps to close the sale. Two examples of brands making strong claims to their markets are L’Oreal and Tropicana. L’Oreal launched a new lipstick with the powerful claim that its 10-hour colour grabs hold and doesn’t let go. They reinforced the closure by making use of celebrities to endorse their products. Tropicana, which is the #1 selling brand in the U.S., states that there are 16 oranges in each pack and they do not use concentrate. It is 100% juice.

4. Consistent Brand Promise
Inconsistency is a brand’s worst enemy. Global brands which have demonstrated amazing consistency over decades include Volvo - it has continually expounded its virtues in passenger protection to the point that it is renowned as being a world leader in safety by consumers of all ages. Robbert

also pointed to Pepsico brand Gatorade which has been using the same message for over 30 years. The product has consistently been associated with a handpicked group of elite athletes from a variety of sports (one of which is the New Zealand All Blacks – is that how the won in Sydney?!).

5. A Contemporary Feel – Always On Trend
Pepsi and Mountain Dew are two examples of brands which have successfully tapped into the culture of their customers. Pepsi the
cans have been re-designed to feature emoji characters as used by Generation Y texters, thus giving the packaging a ‘personality’. Mountain Dew is a favourite of young males who like extreme sports so it is no surprise that its TVC focuses on BMX-riding males racing through a forest drone hunting.

6. Culturally Relevant
Ensure that your brand message to one country also works in another. The example shown was Pantene shampoo and their tag line ‘Hair So Healthy It Shines.’ This is a phrase that appeals to their customers across European, American and Asian markets who are all seeking thicker, shinier hair.

7. Commitment To A Higher Purpose
Express ways in which the product improves…enhances…the life experience of the customer. Be a ‘force for good’. Gatorade, noted Robbert, has been scientifically proven to increase athletes’ performance. It gives them that 101% gain over their competitors.
Google helps people by making it easy to store and organise their information (photos, videos, etc.) and to retrieve it.

Our thanks to Robbert for an incredibly informative message. With the bar set so high, AmCham GWS members are guaranteed of future keynote presentations being of the highest calibre. 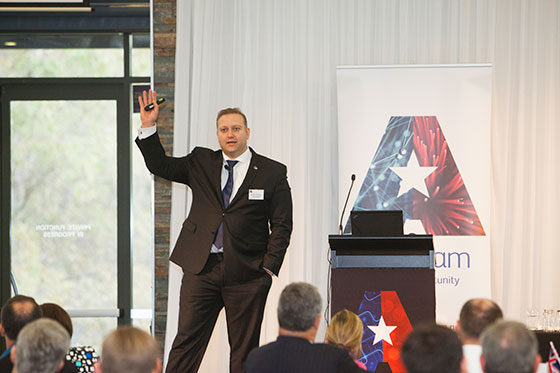